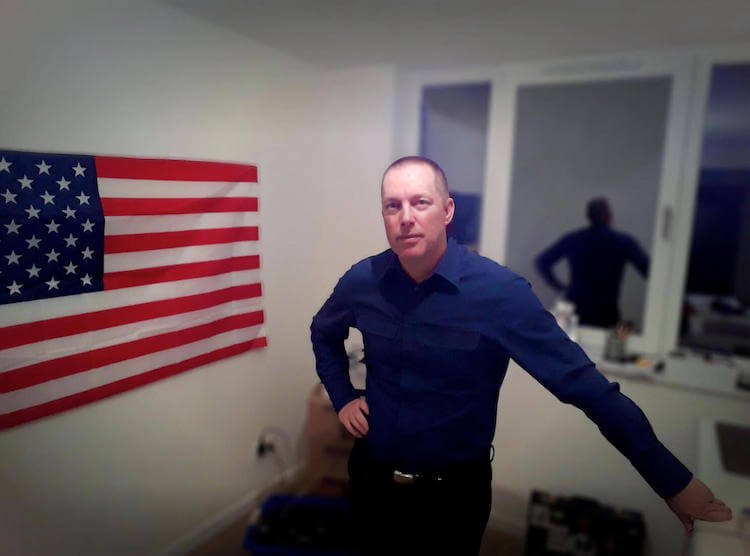 HELENA LIND: Hello Eric, thanks for being here, are you ready to rock?

ERIC ZARTAN: Hi Helena, absolutely, so cool to be featured on Destinosophy.

LIND: What is a Dude from California doing in Hamburg, Germany?

ZARTAN: Moving to Germany was my self-proclaimed Destiny. From the very first time my father took me on vacation to Germany in 1982, I said: "I will live here someday."

Then, in 1993, when the jobs in the Aircraft industry dried up in California, I finally put my plan into action and moved to Germany in 1995. There, I fell in love with Hamburg and wouldn't even think about living in another city. The only deal-breaker would have been not getting a job.

But my dad raised the stakes and made it interesting. He said: "I betcha one-thousand dollars that you won't make it even one year in Germany!"

I was more determined than ever to make it through that one year.

So I took the only damn job I could get: "Maschinenhelfer" - which in English translates roughly to "machine shop helper." The lowest rung on the ladder! Tough decision for a hydraulic systems expert, right?

LIND: Not an easy but all the more a brave decision. How did that go for you?

ZARTAN: It was hilarious, looking back. My job was to bang meter long brass electrodes perfectly straight on a "true table." This was done, of course, with a massive "dead-blow" rubber hammer.

So I put Richard Wagner's The Ride of Valkyrie on the radio, and banged them damn electrodes singing the whole time "da-da-do-dah-daaaah-daaaaa! I'm working in Gerrmannnny!"

My colleagues thought I was crazy, and I happily admitted, "Yes, I am!".

But it worked; I had blown through my measly $1800 cash in 4 weeks, got the job at week 6, and after getting a foothold in Germany, I used it to get better and better jobs.

Then there was no turning back, and I was here to stay!

LIND: Fabulous moments Eric. And when did you decide to venture into writing, book publishing, and supporting and promoting aspiring and established authors through zBooks?

ZARTAN: I had always been in love with art, graphics, and painting. In California, when I was 16, I started airbrushing T-Shirts and sending them across the country as a mail-order business.

Then I started tattooing people, and had customers from San Francisco to San Diego - all from word of mouth! Initially, I was more interested in painting book covers only. But I quickly realized, it's the writing that is awe-sum.

Building a world, taking your reader on an adventure, now that is magic!

So I started with non-fiction. "How To" books and stuff like that. Writing non-fiction is much easier to write than fiction. I used this non-fiction phase to build my blog and platform zBooks.co.

Right now I am busy tying up all the loose non-fiction ends so I can concentrate solely on fiction!

LIND: Come on Eric, tell me more about your cyber fiction. I insist.

ZARTAN: I'm developing my cyber-thriller science fiction series, and it's really cool. Because if you're the owner of the matrix, you can jump around from age to age; you can, for example, do the Viking age, or you can do the whatever age you feel like doing!

Moreover, I want to answer the eternal questions of the emotional mind versus the rational mind.

One of the coolest theories out there is by Scott Adams and it kind of goes like this: we are definitely living in a simulation, we are a simulation, and because of that there's no way for us to actually find out if it's true or not, because the people who are controlling the simulation will never let us know.

The premise has a lot of holes in it and assumes a lot, but it's still a good starting point. And that’s how the series starts anyway, and I don't want to reveal more because that would be a spoiler! 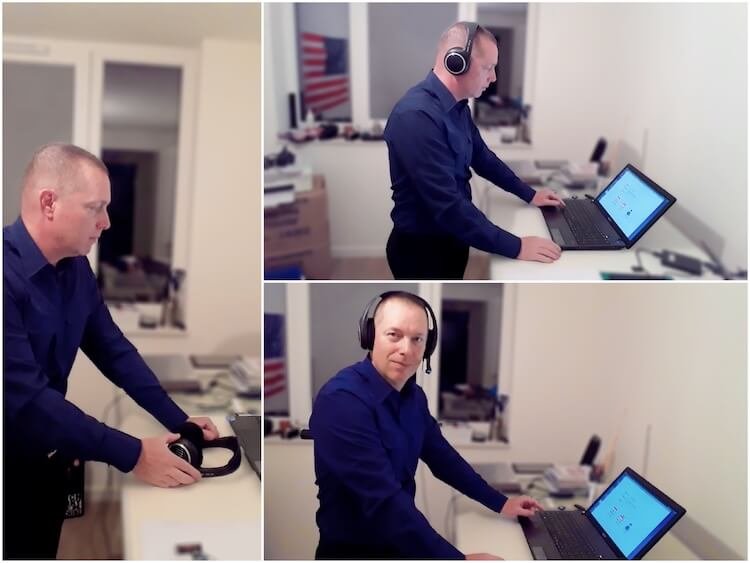 LIND: I understand, but perhaps you will talk a bit more about your fiction later. Now, what is your USP as a podcaster and infopreneur and tell me more about your special, personal perspective?

ZARTAN: My USP and advice is "Do it yourself”. Don't pay a middleman to format, or publish, or god forbid, go write your book!"

Especially in the beginning, you are going to make so many mistakes. So you gotta get out there, get your feet wet, mix it up a bit, and blast through. It's harrowing in the beginning; those first reviews of your book can cause serious physical pain in your chest. But you gotta do it.

The spoils go the victors and risk takers, full stop.

Or, you can be like one of those dweebs who pays a "done for you" service which writes, formats, publishers, and launches "your" book to a New York Times bestseller so you can pat yourself on the back.

Where's the satisfaction in that!? It's "your" f-ing book, and somebody else wrote it?! No thanks. I'll take the pain and scars of the bad reviews over a ghostwriter and an NYT fake title any day.

LIND: What makes you stay focused and calm?

LIND: Tell me about your most meaningful memories as a child.

ZARTAN: One day in the 5th grade, our teacher said, "OK kids, today YOU will teach the class!"

He picked me to teach the art lesson. So I went up there to the blackboard and showed the kids how to draw a cow. I had a book by the awesome artist Jack Hamm and had learned how to draw several animals by drawing boxes and circles and then connecting them.

It worked! It was amazing how many kids got it right, and they looked like cows. Then something profound happened. A girl stood up, I'll never forget her name - Kendra - and she said:

I was perplexed. I was, 'What the hell is wrong with this girl?'

This realization irked me for a long time, and it kept happening!

I became a kind of hydraulic systems expert while I was working as an aircraft mechanic, and the only and sole reason for it was the fact that I had actually read the damned standard operating procedures (that, by the way, everyone is required to read but no one else but me ever bothered to study at the time).

But my fellow aircraft mechanics "pulled a Kendra" on me and looked at me like I was - special. And I told them:

Just read the S.O.P. over there, and you, too, can become an expert! But it didn't work. I realized some people just couldn't escape their programming.

LIND: How did you arrive at the idea to author a Navy Seals themed children's books?

ZARTAN: With this one, I solved my own problem. My 5-year-old son wanted to be a Navy SEAL. When I looked for a book like "Navy SEALs for Kids," I found...none! I couldn't believe nobody had made such a book yet! So I did.LIND: What are your next plans and projects?

ZARTAN: My nearest goal is to bring my blog (Zbooks.co) and books to $10k per month. But that's boring, right?

LIND: Well, a bit, yes. Why not rather tell me more about your science fiction book series instead?

ZARTAN: Gotcha, okay, so I plan on hitting my first 10k with my science fiction books!

ZARTAN: Okay, see what you mean. Helena, I am in a bind right now though, and I don't know if I should reveal my pen name yet. If you are on my list at Zbooks, then you probably have guessed it.

But my first Sci-fi books have received some nice reviews, so I am motivated to scale it up this year. One of my "vorbilds" for this is a young and upcoming author named Shayne Silvers.

He wrote a 3 part fantasy fiction series and took Mark Dawson's Facebook Ads for Authors course and has already hit 1 million in revenue. Not a misprint. One-Million.

Did not happen overnight though, it's a lot of hard work, and now that I know how it's done, it's my turn. We'll see how many scars I get!

LIND: What do you see as your life's purpose? Also as a husband and father.

ZARTAN: My life's purpose is to create true wealth and freedom for my family. "True" does not necessarily mean monetary wealth. It means the tools and mentalities, and, yes! the income to enable them for years to come.

And to this end, books and perennial bestsellers are perfect.

LIND: Do you live your Destiny and to your full potential? Because you told me that you believe in positively manifesting your Destiny. So what's your philosophical angle, exactly?

ZARTAN: No. If I lived my Destiny, I would already be there. I am not, so I am on the path manifesting my Destiny right now.

In other words, I don't believe I've reached my full potential, because my results right now are well below my dreams and my plans (my dreams and plans - they are the same :-))

LIND: What is your life's most outstanding, game-changing event?

ZARTAN: Moving to Germany. After you reach your life's goal, what do you do? I realized that I had aimed too low. What I once thought was impossible proved to be not only possible but just not enough.

This realization was much more powerful than my hang-gliding accident. I was too young and cocky when that happened and didn't really use it to change me profoundly. However, reaching a life's goal, and then realizing that you had aimed too low, and traded many of my higher dreams for a cushy job and job security in corporate Europe is damning.

When I think back to how energized I was when I had my T-shirt and Tattoo business and how I gave it all up for a reliable pay-check to get my ass to Europe, well I am disappointed in myself.

OK - to be fair, you couldn't get a residence permit (at that time) in Germany as a self-employed T-shirt/Tattoo artist. You had to have a lot of capital and run a real company. So I chose the safe option.

But I never gave up on my higher goal.

LIND: Eric Zartan, are you an Agent of Destiny?

ZARTAN: Yes, ma’am!After my hang-gliding accident, where I fell 8,000 (yes eight-thousand) feet out of the sky, bounced off of the Southern California desert floor and lived, I truly am an Agent of Destiny!

Combined with my experiences with how people are "programmed" this has made me a true believer in "manifesting my Destiny."

That means; literally, you make your Destiny.

There are tons of books and literature out there, but when I was in high school, a local guru priest named Robert Schuller came to us for a motivational talk. I'll never forget it. He said:

I don't think anybody has ever said it better since. It's true, it works, and if you believe it, it will just work.

LIND: Great interview Eric, thanks again and look forward to talking about your Destiny soon.

ZARTAN: Cool Helena, thanks for having me, and yes, lots to talk about in the future.

Connect with Eric Zartan and ZBOOKS